The Cameroonian government has denied allegations the country's security forces used excessive force to quell protests in its Anglophone areas. The country's Northwest and Southwest provinces, the only English-speaking areas, are witnessing protests with people calling for an end to the use of French and perceived disenfranchisement.

French and English are the official languages of Cameroon. In October, a group of English-speaking lawyers took to the streets of Bamenda, capital of Northwest region, to protest against the use of French in courts and the lack of English versions of some legal acts and codes.

Demonstrations continued throughout November with lawyers striking in both the Northwest and Southwest, amid allegations the Cameroonian police "used tear gas to disperse" the lawyers.

The alleged police reaction sparked further demonstrations in Anglophone Cameroon, where teachers and students are now striking in protest against the use of French in schools and the presence of "Francophone teachers" in English-speaking areas.

Security forces arrested at least 100 protesters amid allegations some people were killed in Bamenda and Buea, capital of Southwest region.

"The law enforcement officers [military] handled demonstrations in Bamenda and Buea with respect and professionalism, in strict compliance with international norms and commitments of Cameroon in matters of human rights. Investigations are under way and in the event of proven misconduct, the government will take some corrective and disciplinary measures in compliance with the provisions laid down by the law," Government spokesman Issa Tchiroma said in a statement.

Amid ongoing protests, some groups called for a return to a federal state system. Others called for the breakaway of the Northwest and Southwest provinces and the restoration of the so-called "Southern Cameroons", a British mandate during colonisation.

However, Tchiroma said Cameroon would not tolerate disruptions to its national unity and ruled out the possibility of a return to a federal system.

Tchiroma's remarks were in response to a statement by the US State Department, which expressed concern over the situation.

"The United States is deeply concerned by the loss of life, injuries and damage as a result of protests that turned violent in Bamenda and Buea, the respective capitals of Cameroon's Northwestern and Southwestern regions. We call on all parties to exercise restraint, refrain from further violence, and engage in dialogue for a peaceful resolution to the current protests," read the statement, issued on 28 November. 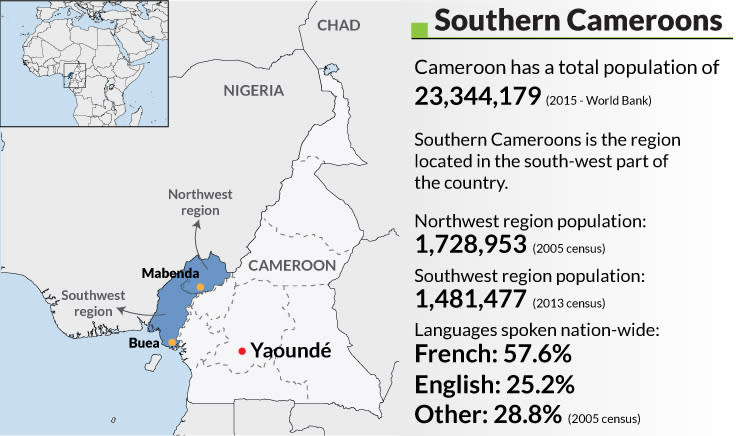 Southern Cameroons was the southern part of the British Mandate territory of Cameroons during the colonisation.

In 1961, people of Southern Cameroons voted whether to join Nigeria or the Republic of Cameroon, which had already obtained independence from Britain and France one year earlier.

The vote resulted in Southern Cameroons becoming part of the French speaking Republic of Cameroon.

In 1972, a new constitution was adopted in Cameroon, replacing the federal state with a unitary state.

The "Cameroon Anglophone Movement" was created in 1984. People originally sought a return to a federal system, but eventually started calling for independence.

More on possible alliance between Southern Cameroons and pro-Biafrans.

Our goal is to create a safe and engaging place for users to connect over interests and passions. In order to improve our community experience, we are temporarily suspending article commenting